What’s At Stake In Copenhagen 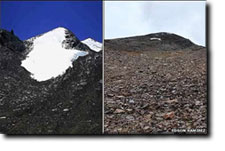 La Paz, Bolivia, where I was born and spent my first 18 years “could perhaps be the first large urban casualty of climate change,” according to The New York Times. [1]   I’ve been tracking the melting glaciers that supply water to the La Paz metropolis for the last few years. Each year the pace of melting has outstripped prior predictions in dramatic fashion. As a kid and a teenager I used to visit the emblematic glacier, Chacaltaya, mentioned in the Times article.  It is now gone.  Extinct.  Scientists speculated that it would be gone by 2020; it formally disappeared this year.  The crisis is no longer a futuristic prediction.  It has arrived.  The human impact stands to be incredibly stark. Margarita Limachi Álvarez, a Bolivian woman living in a village impacted by receding glaciers was quoted in the Times article saying,  “A lot of us think about not having kids anymore.  Without water or food, how would we survive? Why bring them here to suffer?” 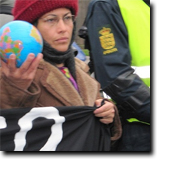 Let’s transpose that experience to a U.S. context:  Lake Mead, which is a major source of water for LA, San Diego, Las Vegas, Tucson, and Phoenix, has a 50% chance of being completely dry by 2021. [2]   That is only 11 years from now.  Major urban centers in Southwest U.S. are going to suffer dramatic decreases in water supplies within the next decade.

Tens of millions of lives are at stake in Copenhagen and beyond.  Literally.  Our profit- and growth-based economy has pushed the planet’s life systems to the brink.  Hence the motto on the streets of Copenhagen this week:  “We need Systems Change, not Climate Change.”  It’s way too late for compromises.

Compromises are no longer viable, unless you are of the mind that some communities and populations are disposable.  At this point, compromises mean the eradication of entire island states. Compromises condemn entire swaths of the African continent to death from drought and severe climate dislocation. Compromises point to massive displacement and repression for immigrants and poor communities of color in the U.S. in an era of intensifying resource scarcity. I’m not willing to settle for compromise.  In my personal life, compromise may well mean the depopulation and implosion of my hometown as a “major urban climate casualty.”

The core of our current conundrum is pretty simple, really: Wealthy corporations and national elites created the carbon problem and must fix it.  My 5-year-old, Maya, gets it.  She understands the basic kindergarten notion of, “If you break it, you pay for it.”  She understands that social harmony, trust, friendship and true teamwork depend on some key values:  sharing instead of hoarding, and being accountable when an injury is committed, whether it was intended or not.  That’s the planetary moment we face.  The U.S, Canada, Europe, Japan and Russia account for 70% of the historic CO2 emissions on the planet.  Yet communities in the Global South, like folks in my Bolivian city of birth, stand to pay for the  broken dishes  with their lives and livelihoods. So we must share the responsibility for emissions reductions and the coming economic transition in a fair and accountable way.

Once upon a time, I remember Candidate Obama inviting us to move away from a ‘me society’ and into a ‘we society’.  Well, Copenhagen gives him the opportunity to walk the talk.  Business as usual is a dead end deal, in the very real sense of the word dead.  As in, 50% of all species extinct by 2100 if we remain on the current growth and profit treadmill.  As in 70 % of the world’s arable areas suffering from drought by 2025 if we stay the course.  What will it be, Mr. President?  Rhetoric or reality?  When the U.S. government’s chief climate negotiator, Todd Stern, refuses to acknowledge our country’s historic “climate debt” to the world, he is defending business as usual.

1. Greenhouse gas emission targets that are real, binding, enforceable, verifiable and in line with the science; targets that reduce emissions at the source.

2. Agreement that industrialized nations must pay for the damage they have done to the rest of the world over the last 200 years–they must pay their “climate debt” and fund mitigation and adaptation efforts throughout the Global South.

3. A transparent, democratic funding mechanism to administer payment of the climate debt.

4. The recognition and protection of the rights of all peoples in all aspects of climate policy. 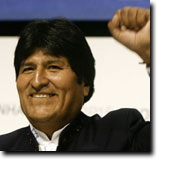 Bolivia’s current president, Evo Morales, made the following insightful observation upon arriving in Copenhagen yesterday: “The current United States defense budget is $687 billion. And for climate change, to save life, to save humanity, they only put up $10 billion. This is shameful. The budget for the Iraq war, according to the figures we have, is $2.6 trillion…trillions of dollars. But directed towards paying the climate debt, $10 billion. This is completely unfair…”

President Obama, the whole world is waiting.  Act now, while we still have room to breathe.

← COP15 Talks Collapse: Now We Build toward Victory in Mexico City | by MG Towards a Coordinated and Powerful Climate Justice Movement in the US! | by MG →