Towards a Coordinated and Powerful Climate Justice Movement in the US! 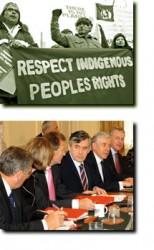 The Copenhagen round of the UNFCCC 15th Conference of Parties has ended in failure.  It is essential for the future of life on this planet that we achieve a global pact based on sound science and equity soon.  But given that the U.S. and its key allies were not willing to consider a fair and binding agreement, it is highly encouraging to see that social movements and many third world nations successfully united behind the slogan, “No deal is better than a catastrophic deal.”

Sadly, the US has been unwilling to put forth real solutions with the speed and scale needed. Instead, Hilary Clinton arrived on Thursday trying to extort an unfair deal by offering a vague package of $100 billion that would amount to a new climate colonialism. At the same time, a UNFCC analysis was leaked showing that the combined offerings of the US and other countries would amount to at least a 3 degree Celsius rise.  This would mean the eradication of whole island nations, dire drought for Africa, and massive displacement from increasing storms and flooding in South Asia.

The Obama Administration has offered cuts amounting to 4% from 1990 levels by 2020. To survive, the Island Nations, African Union, and other third world governments such as Bolivia joined with Indigenous People and others to call for industrialized nations to cut emissions by 49% from 1990 levels by 2020. They are demanding real solutions to the dire mitigation and adaptation issues they face.

Increasingly coordinated social movements and many 3rd World governments held the line that no deal is better than a genocidal pact. Given this context, this is an important victory for the global south & impacted communities in the north on the path to winning:

– rapid, deep reductions in emissions;
– payment of climate debt;
– a rights-based approach to international and domestic climate change policy; and
– the inclusion of our communities in the processes.

On Thursday, December 17, US grassroots forces from impacted communities stepped up to challenge our government’s obstructive behavior.  Representatives of indigenous communities and other communities of color from the US and Canada delivered a letter to President Obama calling on him to act accountably and responsibly.

We must build a powerful climate justice movement that can successfully pressure the US government to act accountably and responsibly.

The next round of negotiations will take place in Mexico City in late 2010.  Not just about climate, as Gopal Dayaneni says, “these negotiations are about everything, international trade; forests; food and agriculture; the rights of the indigenous and forest peoples; resource privatization; international finance (private and public); development rights; oceans; rivers; technology; intellectual property; migration, displacement and refugees; and biodiversity, to name a few. The reduction of emissions is only one part of the negotiations.”

One outcome could be that the ruling elites win an agreement that sets up a new global infrastructure for maintaining inequity amidst an increasingly militarized world where the rich control scarce food, water, land, and energy resources.  Or our social movements could use the next year to build our power to win a pact that helps us transition out of a capitalist system that is clearly broken and towards liberated communities that control our own land, water, and energy systems.

We must build this power starting in our own communities: talking with members, taking local action to frame the problem and the solutions. Along the way, the US Social Forum will be a critical space to align our movements and articulate an irresistible vision.

TAKE ACTION
As our delegation departs Copenhagen over the next few days, we call on you to stay connected to this historic effort to build a powerful climate justice movement led by frontline communities in the U.S.

– Look out for Report Backs & Strategy Sessions in January 2010
– Sign on to the Letter to President Obama
– Integrate Climate Justice into your basebuilding, leadership development, campaigns, and alliance building.
– Gear up to make Climate Justice a central frame of our movements at the US Social Forum through your workshops and other movement building work.

Social movements in the U.S. must seize 2010 to build our power towards winning System Change Not Climate Change. This is our moment to move millions to win a world driven by healing, cooperation, mutual aid, and a healthy relationship to the ecosystems we are a part of.

← What’s At Stake In Copenhagen | by MG It’s Too Late to Compromise on Climate | YES! Magazine →