The world’s leading climate scientists just released a consensus report (vetted by governments) on the latest research on climate disruption. We don’t need an international panel of climate scientists to issue a report to know what to do. The way to deal with climate disruption is to remake our economies based on the principles of resilience and ecology. We must decentralize, democratize, diversify our economic activity from the work-place to the statehouse. We must redomesticate primary production, damper down resource consumption and redistribute resources to create the greatest equity possible.

For many national environmental groups, the report is another reminder that climate change is real and we need to act. But WHO will act first, what will they do, and where will that action take us?

The ‘climate action’ frame is a dangerous one. Here are a few examples of just how: 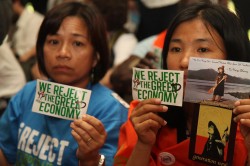 Many polluting industries are profiteering from the ‘climate action’ frame. Just one example—while national green groups succeeded in forcing the EPA to regulate pollution from coal power plants (without a just transition plan for how to replace that energy), the EPA simultaneously created a massive loophole for waste corporations to market waste pellets as an alternative (fuel) feedstock for power plants, cement kilns and other industrial facilities. Burning waste is 2.5 times more carbon-intensive as burning coal, and produces up to 14 times more mercury and 28 times more dioxins (per MW/hr of energy). Replacing dirty coal with dirtier waste – Is this the climate solution we wanted?

Another path of ‘climate action’ that will lead down a dead end is the technofix. Corporations seeking to cash in on the call for climate action are investing in synthetic biology, geoengineering, and other green tech industries that continue, if not exacerbate corporate concentration of land, labor and living systems. They are part of Obama’s climate plan and billions in federal investment have been allocated to “The Bioeconomy”. Land grabs in Brazil to grow sugar for next generation biofuels, destruction of small farmer livelihoods throughout the Global South and deploying into our environment new microbes that never before existed in nature — Are these ‘climate solutions’?

We don’t need the false promises of silver bullets like geo-engineering, waste-to-energy, synthetic biology, offsets or carbon markets. Those guns, held in the hands of corporations and their client states, are aimed not at solving the climate crisis, but at a greater concentration of wealth and power.

Which pathway for climate action will win the day? How can we ensure that the world’s remaining resources aren’t thrown down the drain but instead, directed towards fostering resilience?

We must organize on the job (and increasingly in the unemployment lines!), in our neighborhoods, in the parks, at our schools, in our houses of worship for the REAL Solutions. The only solution is a Just Transition out of a dead-end, death-dependent economy into the Next Economy; rooted in equity, diversity and ecological regeneration; based at the local and regional scale. Lets build Our Power to manifest a Just Transition!