A Call for Supporting Relief Efforts

Typhoon Haiyan (Yolanda) marks the 24th storm hitting the Philippines this year. In the past decade super typhoons and tsunamis caused by climate change have haunted communities in the Pacific, resulting in constant displacement and rebuilding each year. 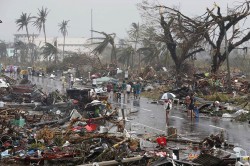 Eerily, Typhoon Haiyan arrives at the same time as UN climate negotiations, COP 19, convenes in Warsaw this week. Philippine climate negotiator Naderev Saño publicly commenced a hunger strike during negotiations, as a plea to the world to act swiftly on climate change. Saño’s home province, Leyte is one of the primary targets hit by the super typhoon.

Amidst the tragedy of the super typhoon, we are reminded thatextreme ecological disruption in the Philippines has been a reality since the beginning of its colonial history. In 2012 alone, over 10 million Filipinos were displaced by climate disasters. There are over 400,000 Filipinos living in the Bay Area, many of whom immigrated here because of drastic ecological and economic changes in the country. They, like many other immigrants, can be called the first wave of climate refugees.

But let’s be clear, Typhoon Haiyan is not a climate disaster only because it is an extreme weather event. It is also a climate disaster because the capacity of the islands to weather the storms have been eroded by the same thing that is making the weather worse – decades of deforestation, mining, industrial development, displacement, urbanization, and labor exploitation. US imperialism in the Philippines has been paving the way, and driving us to climate disasters for a very long time. The eradication of traditional livelihoods, the exploitation of farmers by the green revolution, and the open door to mining companies by debt dependence are also drivers of climate disruption.

Within a few hundred years people in the Philippines, like so many other places, have gone from sustaining their communities through a complex, diverse and interdependent set of economic and ecological relationships – held together by a sacred relationship to the places they call home – to being forced to extract, exploit and export everything from labor to gold to coconut. This is the true disaster that has been unfolding before our eyes. This is just one more chapter of a terribly tragic, but reasonably predictable, consequence of an economy based entirely on exploitation.

Movement Generation stands in solidarity with the Philippines. Please join us in direct disaster relief.NAFCON and TIGRA are both reliable Philippine Solidarity organizations (Bay Area based and Filipino run) that you can send your donations to: 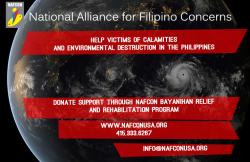