Let’s Get This Right: Why We All Need to Stand up for Immigrant Rights Now! 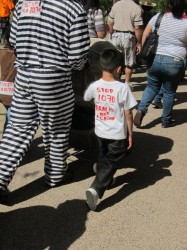 (photo by Marisa Franco, Right to the City Alliance)

Events in recent weeks in Arizona should be a cause for concern for all people who seek justice and progress in the US, and they have special significance for those of us who call the climate justice, environmental justice, and environmental movements our home.  These events call for a principled stand and action on our part, in defense of communities that have been displaced by economic and ecological crises, and against the racist and bigoted institutions that we also confront in the fight for a sustainable future.

In the words of Pablo Alvarado, the Director of the National Day Laborer Organizing Committee (NDLON), “this week, the Arizona legislature passed the most anti-immigrant legislation the United States has seen in a generation.”  This legislation, SB 1070, will:  1. legislate racial profiling by requiring police to arrest and detain people based on a “reasonable suspicion” that they are undocumented, 2. make it a state crime to be unable to produce legal residency documents, and or to transport or shelter undocumented people, and 3. ban day laborers by making it a crime for anyone to “pick up passengers for work” and penalizing anyone seeking work at a day labor site, or those contractors who hire them.

We know from experience that nothing encourages the right wing like success. Now, less than a week since the passage of SB 1070, there are copycat bills being considered or proposed in more than a dozen states nationally.  This tide will only be turned if we face the enemies of our communities head on and stop them cold.

The environmental movement has historically contained a xenophobic trend which has supported laws like California’s Prop 187 and Arizona’s SB 1070.  These groups have sought to use pro-environment arguments to advocate for racist policy on immigration and population.  Let us be clear – there is not and never will be a solution to climate and environmental issues that is not built upon a strong foundation of social justice.The Tea Party Republicans that are looking to rally their troops and gain votes through cynical racist attacks on immigrant communities are the main enemies of our movement as well.  These enemies of democracy, of justice, and of the earth attempt to block everything but profits for the rich, and they will have to be systematically overcome to advance the cause of sustainability in this country. If they want to fight on immigration, let’s give them the fight they are looking for.

We can never forget that the policies that have driven migration to the US – neoliberal, free-trade policies like NAFTA that have destroyed Mexican and Central American economies (particularly rural economies), the dumping of surplus corn by the US into Mexico to bankrupt farmers, and the establishment of export processing zones and export oriented production in Mexico and around the world by US design – are the same policies that must be overturned to reach a workable solution to environmental and climate issues globally.   There will be no sustainable future without expanding local democracy and economies, which is only possible by dismantling the neoliberal policy that strips wealth from the workers and the countryside whether in Detroit or Jalisco.  And with the continued destruction of the environment in global South countries, the issue of migration as a human right for those whose land and livelihoods have been destroyed will only become more important.

Time to Stand Up

Leading immigration rights organizations based in Arizona like NDLON and Tonatierra have put out the call asking for support from allies in all parts of the US.  These forces are concentrating their efforts in the next 90 days “to stop SB 1070′s implementation, to defend civil rights, and to set federal immigration reform efforts in the right direction.” Calls to action and solidarity are being coordinated through www.AltoArizona.com.

We live in complicated times with many challenging issues confronting our communities: climate change, the foreclosure crisis, the recession, wars in Iraq and Afghanistan, and domestic battles around immigration, health care, and the direction of the nation in general.  The solution to this complexity isn’t for us to tuck ourselves into our corner and to try to convince others or ourselves that our issue is the most important.  We need to lean into this complexity and build a movement that understands that the same characters and systems are to blame for our different problems.  We also need a movement that is developed and sophisticated enough to take on fights on multiple fronts at the same time.  It’s time to broaden the front for immigrants rights.  See you in the streets onMay Day!