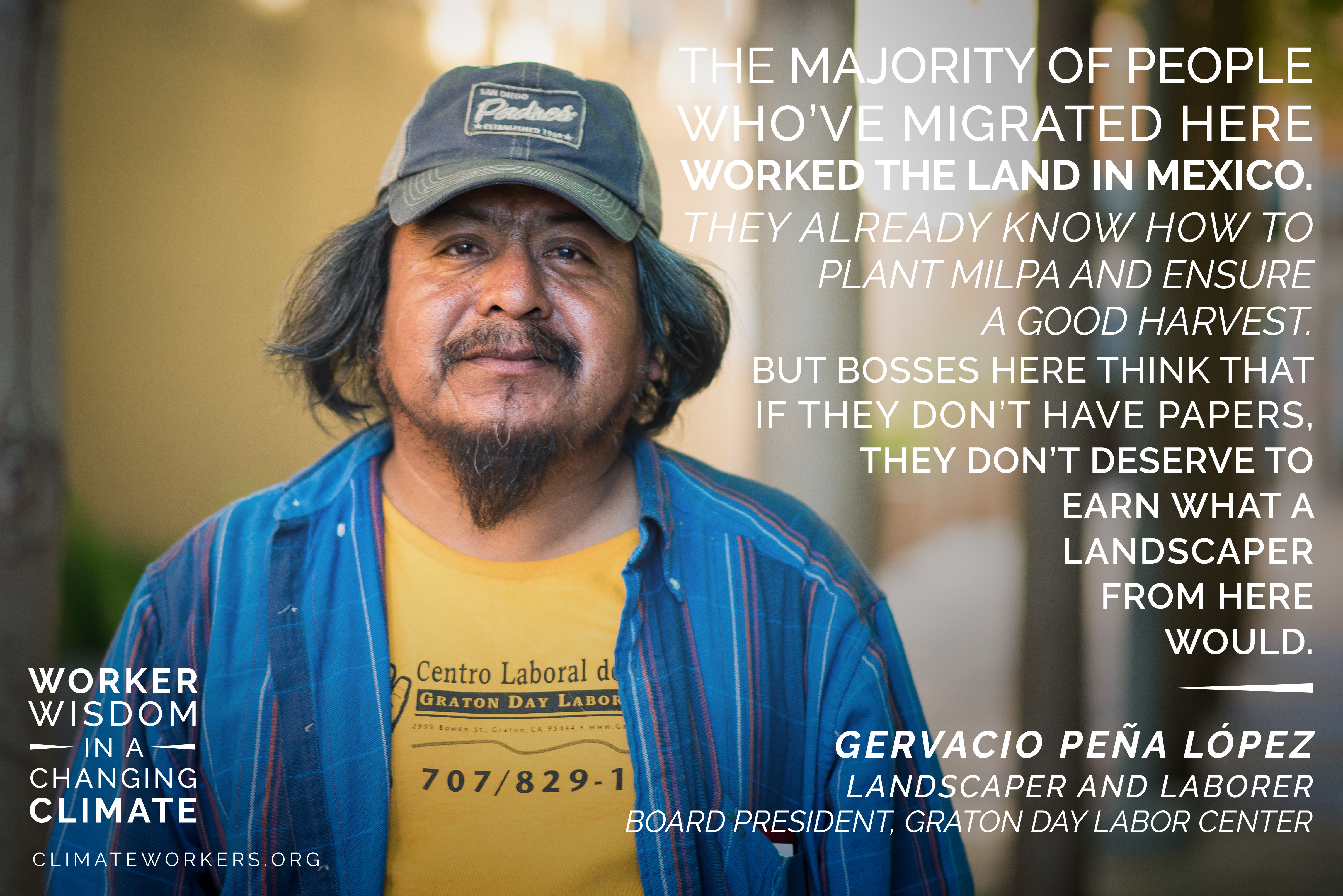 This article is part of a collaboration between YES! Magazine and Climate Workers that seeks to connect the experiences of workers with the urgency of the climate crisis. This interview was translated from its original Spanish and edited for length and clarity. Read the Spanish version here.

After his single mother suffered an injury, Gervacio Peña López left school in Mexico and made four attempts to enter the United States in search of work to support his family. He eventually found a job pruning grapes in Sonoma County, California. It was punishing labor that earned him $3.35 an hour and left him so exhausted he chose sleep over meals.

Today, he is a landscaper, laborer, and board president of the Graton Day Labor Center, a worker-led day organization that advocates for the rights of domestic and day laborers. He has studied liberation theology, marched with the United Farm Workers, taken on the powerful wine industry, and fought for rent control—and won.

For Peña López, who is Mixteco and whose grandparents farmed, farmworkers bring millennia of traditional ecological knowledge, passed down intergenerationally, about how to live in balance with the land and each other. Yet, indigenous and immigrant workers regularly see their skills devalued, their knowledge discounted, and their labor exploited.

Brooke Anderson: Gervacio, I know you as a very committed leader in social movements here in the North Bay, but tell us a bit about your life before arriving here.

Gervacio Peña López: I was born in Santiago Naranjas, Oaxaca, in 1967. It was the year they captured and killed Che Guevara. My mom was a single mom. At first, she just worked in the house, taking care of the house and of us. But that didn’t pay, so she’d clean clothes for other families or sell tortillas. Later, they’d recruit people to work the fields in Sinaloa picking tomatoes, eggplant, cucumbers, and everything that gets exported to the U.S. My mom would make us food and then climb up on a truck to go to work every day so that I could study.

Anderson: How was it that you decided to come here?

Peña López: Everything was going well for me in school. I wasn’t thinking of coming here. But my mom got in an accident. She was injured by a nail. I was still in school, but I thought that I should be the one who should go to work so that it would not be difficult for my mom or my siblings. So in 1986, I tried four times to cross the border but they threw me out. I was deported to the San Quintin Valley in Baja California. But by 1986, I finally arrived here. The only work available was pruning grapes. But since I had not previously worked in Mexico, I wasn’t able to bear such hard work here. The first few months that we worked the grapes, I’d leave at night so tired that all I could do was sleep. Even though I was hungry, I’d say “I’d rather rest than eat.” All my bones hurt. It was difficult for me to adjust. I’d say to myself, “This isn’t work. It’s torture.” We worked nine hours every day for $3.35 an hour.

Davin Cárdenas: How was it that you decided to get involved in social movements here?

Peña López: I only came here to work. I didn’t want to get involved in anything, but once when we were picking grapes, they fired my cousins and me from a ranch. We were ready to start picking when they gave us a piece of paper that we had to sign saying that they would pay us 80 cents per bucket of grapes. We didn’t want to sign it because we wanted a dollar. Everywhere else was paying a dollar already. “No, you’re crazy,” said the owners. “If you want to work, you have to sign it.” We’d already heard of the United Farm Workers Union and Cesar Chavez that defended farm workers. So I started to march with them.

Anderson: You already know so much about agriculture. How did this idea of a green landscaping certification for day laborers like you come about?

Peña López: People who’ve migrated here worked the land in Mexico. So, they already know. Working the fields here in California is many hours of doing the same thing over and over, but the majority of the people who come from the south already know how to plant milpa(corn), care for the seed with very little water, and ensure a good harvest. With little water, my grandparents planted at least 12 different vegetables, from chiles, tomatoes, and lettuce to flowers to take to church.

However, the boss sometimes pays the very minimum because they think that if immigrant workers don’t have papers they don’t deserve to earn what a landscaper from here would. So as part of the Graton Day Labor Center, we worked together with Santa Rosa Junior College to put together a certification program.

We learned which plants use the least water and how to plant them. Many plants are from here and some come from afar but have adapted to this climate. Some require more or less sun depending on the area. Many clients want grass, but other plants use less water. Saving water is a big benefit for everyone because as everyone knows, we are in a drought and lack water to grow food.

Anderson: This is wine country. How is that industry affecting the land, water, and people here?

Peña López: I worked in the wineries. The wine industry here has grown a lot. Right now they are planting grapes in the hills. They have cut down the forests to plant more grapes. I knew Healdsburg 27 years ago. Why is it that one town like this has to produce wine for the entire world? It’s madness. It makes me sad to see that they have taken out all the apples, peach, and plum orchards in order to produce grapes. But grapes yield the most money. They can generate the most profit in a short time. It is an investment. That’s what everyone goes for.

But what if later on there is no more fruit? They will have to bring it here. The people who work the grapes have families. For them to pay for an organic apple is not that easy. What they earn here goes very quickly.

The wineries also use a lot of water to wash and process the grapes. Also, when they plant a new crop, they inject gases into the earth to kill the fungus that can affect the root of the grape. They are very toxic. After that what they most fumigate with is sulphur on the leaves. But this dust, where does it go? Into the rivers and the creeks.

Cárdenas: There is an affordable housing crisis for working people. You participated in the campaign to pass a rent control ordinance. Tell us about this victory.

Peña López: Yes, the wine industry has a lot of influence in the government. What makes me the most angry is that they don’t bother providing housing for their thousands of workers. Before, the rent wasn’t important when we came because we only stayed for three months. There were places in the vineyard where they would let us sleep among the grapes, tolerating the outdoors, camping and that was it. We were content because when the harvest was over, some would move on to Oregon, others back to Mexico.

Many families that come to the Graton Day Labor Center live in Santa Rosa and are affected by the rising rents. The people rent what little they can with their salaries but there is no affordable housing for workers. Led by the North Bay Organizing Project, we launched a Right to a Roof campaign for a rent control and just-cause eviction policy. It took time, but we won. Now they won’t be able to raise the rent more than 3 percent on people in Santa Rosa. They can’t be evicted without just cause. It is a little bit of protection that didn’t exist before. Sometimes we have to celebrate something even though it is a small victory. I am learning that it is a long process, and that even when there is a lot of disagreement, or when the other side has a lot of influence or economic power, our community can unite to defend itself.

Cárdenas: You said your family worked the land in Mexico. As a worker here, why do you think that land defense is important?

Peña López: Before, I remember how we’d plant in the villages. If you didn’t plant this year, you didn’t have to worry because you could harvest with some friend or relative and you would at least have corn for tortillas for several months. If it was just to eat, no one would say anything to you, no one would criminalize you. But then with this idea of commerce, now they can sue you if you cut fruit. Before, it wasn’t like that.

In my homeland, going to help another family was seen as a good thing. They use tequios in indigenous communities. A tequio is an unpaid community job. Each member of the community works for the common benefit—for example, when you work in the school, the church, or the community center. And there was land held in common by the community. They’d plant corn and then sell it to the people at a low cost so you didn’t have to go to the city to buy it.

Land is for the common good. When it’s converted into private property, it’s only for those who can buy it and impose their rules. Sometimes people make so much profit that it distances them from their families and communities. One forgets that they belong to that community.

The Earth should be protected because it is something that has provided food for our families for a long time. We shouldn’t put a price on land and say, “This land is worth this much and belongs to this person.” These days, if you cross a fence, they criminalize you and you have to pay for everything. We are losing this idea from before that everyone helps with a job to make it easier.

← MG stands with Orlando and our queer and trans family everywhere Worker Wisdom in a Changing Climate: Melissa Stoner: A Union Member Standing in Solidarity with the People of Standing Rock #NoDAPL →