It was truly a day to remember…

It was not just the scale of the People’s Climate March that was significant; it was the diversity and leadership of the growing movement in the United States that was represented.

age passed on from the US Social Forum march against the local polluting incinerator in 2010 organized by the Detroit Zero Waste Coalition. The symbol was taken up by the youth who took part in the Climate Justice Youth Summit convened by UPROSE this August. It was as if the spirit of our sister Charity Hicks had risen up from the very streets where she was tragically struck down just a few months ago. She was a food, environmental and climate justice warrior and leader of the East Michigan Environmental Action Council.

The sunflowers were followed by a delegation representing communities affected by Superstorm Sandy, and behind them – a large contingent of indigenous peoples from throughout the world. It was an incredibly powerful image of solidarity. Other frontline, environmental justice communities followed, including El Puente from Brooklyn with a lively group of Boricua musicians escorting a 20 foot high image of Mother Earth. Tens of thousands of people of color-led organizations and allies followed, including organizations representing migrant justice, domestic workers, housing rights groups, homeless people and many more.

There were some celebrities, but the stars shone everywhere, not least of which were the powerful voices of our CJA members and the frontline communities our movement represents. Kandi Mossett of Indigenous Environmental Network, Stanley Sturgill of Kentuckians for the Commonwealth, Mari Rose Taruc of Asian Pacific Environmental Network, Elizabeth Yeampierre of UPROSE, helped kick off the March at the opening press conference.

There are thousands to congratulate, generations to acknowledge and hundreds to thank for making this day important – including a fierce but mighty crew of CJA volunteers who showed up at 6:30 am to marshal our contingent. There were many acts of love, solidarity, patience, resolve, leadership and heroism on the day of the March and the months leading up to it. Hopefully in the weeks and months that follow we can do justice in appreciating these individuals, organizations and communities. In the meantime a big thanks to Eddie Bautista of New York City Environmental Justice Alliance and Elizabeth Yeampierre of UPROSE for their years of building the environmental justice movement in New York, and providing solid leadership for CJA in the MST, as well as a special shout out to Ananda Lee Tan of the Global Alliance for Incinerator Alternatives, our other CJA representative on the MST who has been a tremendous ambassador, supporter and leader to all of us.

In the coming week, we’ll send out more reports–a social media and press round-up, videos and photographs as they come in. In the meantime, have a look at our Flickr page, and follow us on Facebook.

Thanks to all of you within the Climate Justice Alliance and extended family who traveled far to make this moment happen. It is a long road that continues on from here. Let’s appreciate the journey to get here and look forward to traveling the road ahead together.

Check out the Our Power Campaign online: www.ourpowercampaign.org 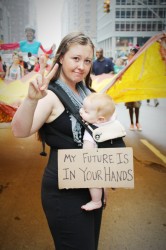 Filed under: Blog by Movement Generation
Comments Off on A Day to Remember: Frontline Communities Lead People’s Climate March