Sandy: A Wave of What Lies Ahead

[A portion of this statement was later used to create a national solidarity statement that was published on Tues 11/6/12.]

Movement Generation stands in solidarity with the communities hit by Superstorm Sandy. We mourn for the lives lost in Haiti, Cuba, Canada, New York, New Jersey and all areas impacted by the storm. And we are inspired by the genuine expressions of solidarity as people work to take care of one another under extremely challenging conditions. 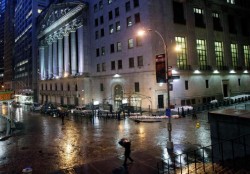 As we learn the full extent of damage from this huge storm, we at Movement Generation are struck by the need for our communities and movements to prepare for rapidly changing conditions.

There will be many more shocks—acute moments of disruption such as extreme weather events—and slides—incremental disruptions such as sea level rise that play out over longer timeframes in devastating ways, if we are not prepared. The question is, how can we prepare to harness these shocks and slides to win the shifts we need in favor of people and the planet?

For decades, scientists have been warning those in governance about the need to cut greenhouse gas emissions and about the potential impacts from climate change on different regions. But the politicians have been both silent and stuck.

We’ve seen local and state level officials become much more public about the impacts because they are now having to manage them. “There’s no such thing as a 100-year flood … we have a 100-year-flood every two years now,” says New York Governor Andrew Cuomo. ”These are extreme weather patterns. The frequency has been increasing … Anyone who says there’s not a dramatic change in weather patterns I think is denying reality.”

“Communities on the frontlines of the climate crisis have never been silent about the solutions that will save our planet and our soul as a society,” says Cecil Corbin-Mark of WE ACT for Environmental Justice in West Harlem. “We have advocated for bus rapid transit, affordable safe housing and resilient communities, green jobs through public investment, and policies that cut and eliminate carbon.”

Yet the failure to take climate change seriously has hampered our ability to effectively respond to these predictable shocks.

The post-Sandy activity on the ground has already exposed the incompetence of governments to respond effectively – particularly to needs in working class communities – and, in its place, grassroots , community-based efforts are springing up to provide basic needs and resources to communities in true acts of resilience. 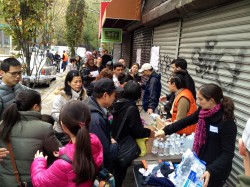 Says Helena Wong of CAAAV, “Today, we showed that the power of community can hold us together even through the toughest of times and it was done with lots of love, laughter, and hard work. Today, it was clear that even if City leaders do not acknowledge the work that we have done, we know we reached the people who needed it.”

An October 2012 comprehensive survey found that some states and cities around the country are beginning to draw up plans, but they’re nowhere near sufficient. “Most adaptation actions to date appear to be incremental changes,” the survey says, “not the transformational changes that may be needed in certain cases to adapt to significant changes in climate.”

While elites have been silent or stuck, grassroots forces in New York and New Jersey have been loud and clear on the path for real solutions:

– Right to the City and Grassroots Global Justice Alliance groups like CAAAV, Picture the Homeless, Make the Road, and many more work to end displacement and economic inequity—both of which are integrally connected to climate change.

– The New York Environmental Justice Alliance has been working to protect New York’s coastal communities from the compounded burden of toxic inundation when storm surges like Hurricane Sandy hit.

Here are a few key facts about the factors that created this Superstorm Sandy:

— 2012 broke all records for melting of Arctic sea ice

You can see how a combination of rising sea levels, tides, and storms could affect different parts of the United States with this helpful GIS mapping tool from Climate Central.

– Ironbound Community Corporation, a member of theGlobal Alliance for Incinerator Alternatives and the New Jersey Environmental Justice Alliance has been crafting‘Zero Waste” solutions that create recycling and composting jobs while drastically reducing greenhouse gas emissions from landfills and incinerators.

– There are countless efforts to reclaim vacant lots for community gardens and to increase access to healthy food as part of a regional food system.

– Indigenous communities throughout Canada and the U.S. have vehemently opposed fossil fuel development, like the Tarsands and the Keystone XL and Enbridge Northern Gateway pipelines, to protect native land and livelihoods against polluting corporate interests.

– Small farmer groups in Haiti have organized to reclaim the right to grow food for the people rather than for global food trade.

Movement Generation stands with the numerous community-based and indigenous  organizations who have been loud and clear on the pathway forward to address root causes and foster community resilience.

Across the nation, we believe that resources must be redirected to transition us out of a globalized economy fueled by dirty energy and into local, living, participatory economies.  The efforts of these groups are charting a path to public transit, zero waste, food sovereignty, wetlands restoration, clean community-owned power, and self-governance.

The days, weeks, and months ahead will be full of decision-making about how to invest precious resources in the reconstruction of communities. We hope the voices of those working for root cause solutions will be heard loud and clear in order to break the silence and move us toward a just transition.

With the help of over 100 volunteers, CAAAV is distributing supplies directly to residents of high rise buildings who are still without power, checking on elderly residents, and helping people reconnect. Please send donations directly to them or other grassroots providing direct support: http://www.nycharities.org/donate/c_donate.asp?CharityCode=1838&amount=&designategift2=

– On the relationship between sea level rise (a slide) and intense storms (shocks): http://www.washingtonpost.com/blogs/ezra-klein/wp/2012/10/29/yes-hurricane-sandy-is-a-good-reason-to-worry-about-climate-change/

– Democracy Now has had a bunch of good coverage and useful interviews: http://www.democracynow.org

– On adaptation and preparation: http://www.washingtonpost.com/blogs/ezra-klein/wp/2012/10/31/why-the-united-states-is-so-unprepared-for-climate-disasters/

– On climate in the election debates: http://www.guardian.co.uk/environment/2012/oct/31/sandy-climate-change-us-election?CMP=email

← Report Back: Climate Justice Alignment Convening: Detroit, Sept 24-27 2012 Communities Across US Stand with Those Impacted by Sandy →