MG Behind The Lines | Part 2: The Only Secure Community Is An Organized One

Editor’s note: This is part 2 of a short essays series we are releasing to explore key themes in the North Pole Show Season 2. Each essay is written by an MG collective member. We hope you find them informative and thought provoking. Follow us on social media to add your thoughts to the conversation. 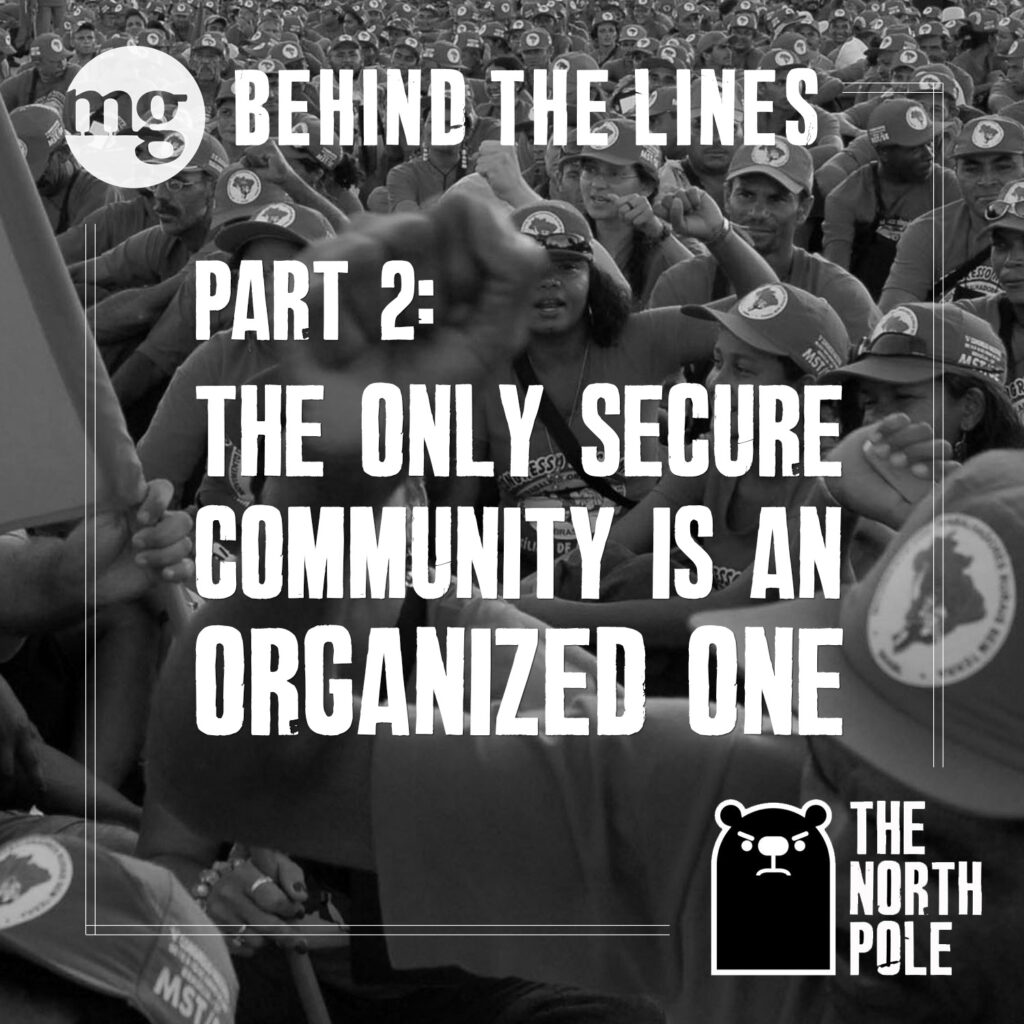 “Real sanctuary is… when no one gets evicted and no one gets deported and we realize as a people that the only way to survive is by taking care of one another.”
– Benny
The North Pole Show Season 2, Episode 7

Increased anxiety and emotional distress as a factor of capitalism’s increasing toll on land and life. Poverty/inequity. Targeted violence on Black, Latinx, Indigenous, and migrant communities. So many crises on such a huge scale.

But every larger crisis is the cascading of individualized crises. Someone you know gets evicted after facing housing insecurity for months or years, maybe after a breakup or a job loss. Someone struggles with chronic health conditions that inadequate health care fails to address. As a single parent, you’ve had to piece together child care without enough social support because everyone you know is hustling trying to piece it together too. And even though more than 44 million people in the US have student loan debt, everyone fights the bill collectors one by one.

Taking these on as isolated individuals is overwhelming! It takes everything we have to get through. These “individual problems” are how the system keeps getting over on us.

These problems are opportunities to get organized around. They are actually cracks in the system. When folks on the frontlines come together to apply collective work towards meeting our needs in ways that are loving and free, they reveal the cracks and start to wedge them open. We call this “resilience-based organizing” and we’ve learned it from the Black Panther Party for Self Defense who had 61 self-help programs in Oakland. And from the Landless Workers Movement in Brazil who set up intentional communities who work under-utilized land owned by a big landlord and then build schools, clinics, and self-governance systems.

We’ve seen it at Standing Rock as water protectors set up camps to pray and honor the sacredness of the water in the way of the bulldozers and police dogs. And on the buses of Dreamers. The approach is to lead with the vision; live that vision; and live it in a way that reorients power to be more local and democratic; rather than simply trying to win concessions from corporations, or the structures of government that serve them.

Benny talks about it as true sanctuary. It requires organizing to move the resources from prisons and policing, fossil fuels and Teslas to people-powered solutions where our work is restorative rather than extractive. Find the cracks. Find others you can organize around them with. Contest for the power to self-determine by collectively self-governing.
———-
Go Deeper:

Read MG’s Article “The Work Of Love And The Love Of Work: Resilience-Based Organizing As A Path Forward“

Filed under: Blog by Movement Generation
Comments Off on MG Behind The Lines | Part 2: The Only Secure Community Is An Organized One