Hurricane Katrina after 10 Years: The Unnatural Disaster that Broke Us Open 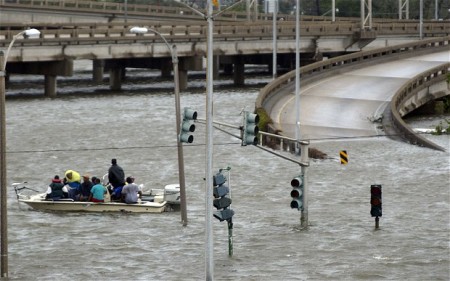 Ten years ago this Saturday marks the day that a massive, Category 3 hurricane called Katrina made landfall in New Orleans and the Gulf Coast. Unleashing a devastating flood of water, violence, and displacement, the storm and its aftermath created the deadliest convergence of extreme weather with extreme racism in modern U.S. history.

When the levees broke, our hearts broke. We watched as thousands of people in New Orleans – mostly black, poor, and deeply rooted in their city – were stranded on rooftops above flooded neighborhoods. The government abandoned the Lower Ninth Ward and entire communities. The corporate media labelled people trying to find food as ‘looters.’ The climate disaster quickly became a social crisis, and it was Kanye West who summed up what everybody could see: “George Bush doesn’t care about black people.” 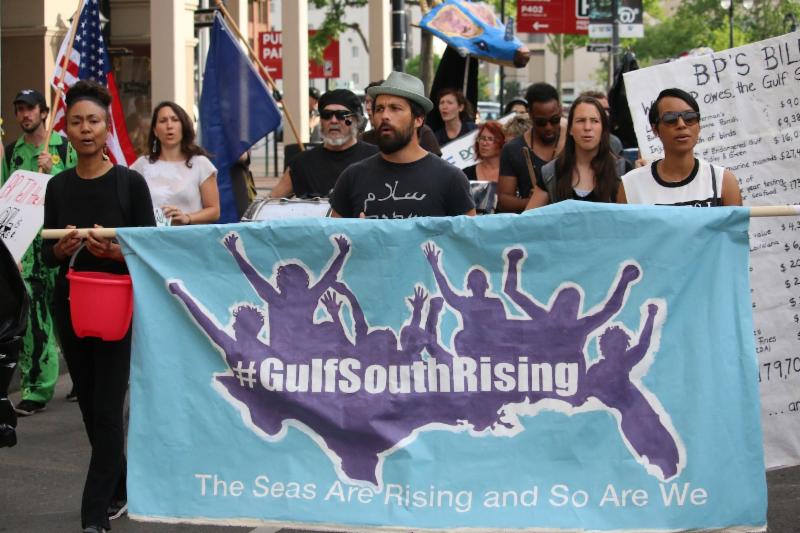 Support the #Katrina10 Actions This Week across the Gulf Coast!
In the 10 years since the storm, New Orleans and the Gulf Coast have struggled with ongoing aftershocks and attacks: displacement, privatization of schools and services, and another brutal ecological disaster in the 2010 BP oil spill. But throughout the region, grassroots organizations have been building resistance and resilience for their communities. And this week during the anniversary, the #Katrina10 movement is mobilizing for justice on a major scale.
Our friends at Gulf South Rising are taking action with over 13 events from August 21-30 in multiple locations from Gulfport to New Orleans. This Week of Action represents a powerful coming together of frontline groups representing black, indigenous, immigrant, and working-class communities in the region — including MG’s local partners in the Our Power Campaign. Earlier this year, we were proud to travel to the Gulf and lead an intensive training for many of the grassroots organizers leading this week’s efforts. Their power and purpose taught us far more than anything we may have offered them.
If you are in the Gulf South, we urge you to join those efforts! And here in the Bay Area, we have another way to show your solidarity… 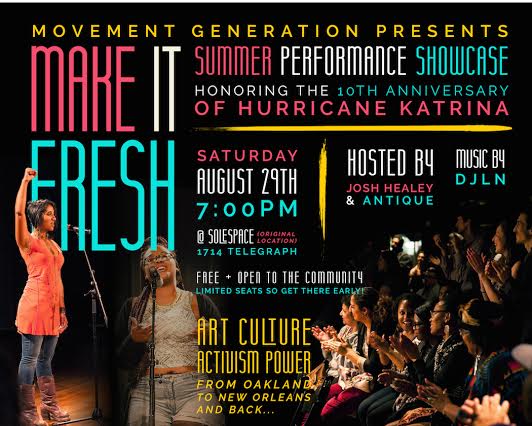 We are hosting a special Make it Fresh cultural event this Saturday, August 29 here in Oakland to honor the #Katrina10 anniversary through art, culture, and multi-racial solidarity. Featuring freedom fighters, poets, and musicians like Antique Naked Soul, Do DAT, Kele Nitoto, and Make it Fresh performers from Oakland and Richmond, this event will be one of collective mourning and joyful rebellion. There are only a few seats left, so reserve your free spot ASAP.
This is a communal effort, fighting for our peoples and for the earth. As we remember the past, we recommit to building a future where climate justice is a reality and black lives always matter.

From the Bay to the Bayou and back.

Filed under: Blog by Movement Generation
Comments Off on Hurricane Katrina after 10 Years: The Unnatural Disaster that Broke Us Open