Earth Day Takes on New Meaning in Cochabamba | by MG 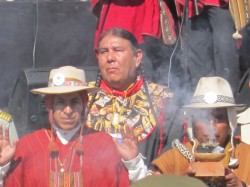 Today, Earth Day, was the closing day of the first World People’s Conference on Climate Change and the Rights of Mother Earth in Cochabamba.  It occurred to me as I watched participants and organizers streaming into the Félix Capriles Stadium for the closing ceremonies that decades from now I’ll be talking to my children and 2010 will be remembered as the year that Earth Day took on new meaning.  It will be the year that humanity turned a corner in our relationship to Mother Earth and began struggling along a new course.

Over the last week, a lot of information has been exchanged, new relationships were built, points and direction were strongly debated, and a new, shared course is taking shape.  Always present was the role and actions of the US government, the principle polluter of the last century, and the main obstacle to a meaningful response to climate chaos.  It’s been mentioned earlier that the Obama’s Copenhagen Accord, if it were adopted, would create a carbon market which researchers state will decrease global emissions by 2% (of 1990 levels) by 2020, which is less that what countries committed to 10 years ago under Kyoto.  So as the problem has gotten worse, the US administration under president Obama is proposing that the world be less ambitious.

But, as resident Chávez of Venezuela pointed out in his statements today at the conference, “There wasn’t any accord (agreement) in Copenhagen.”  Neither is the Copenhagen Accord a proposal.  It’s a threat made by a bully.  The US is playing hardball, withholding funds for those impacted by climate change unless they sign on.  In a lighter moment of the closing statements by government representatives today, the representative of Ecuador (which has been denied $2.5 million dollars already for it’s lack of support) countered the US withholding of funds with an offer of $2.5 million dollars to the US if it will join the rest of the world by signing the Kyoto protocol.  President Chávez later suggested that the money would be better spent getting social movements to Cancún.

And he was right.  Leaving Cochabamba there is a real sense in the air that our real work lies in front of us.  A new global people’s alliance for the defense of Mother Earth will be formed.  Representatives will be going back their home countries to continue fights around water, food and seed sovereignty, land reform, jobs and housing, indigenous rights, forest protection, as well as for the protection of their local land and ecosystems against destruction by mining, dams, logging, and more.  They will also have new direction in the fight against destructive climate policy.  At the World People’s Conference, particular points of contention were around the Program on Reducing Emissions from Deforestation and Forest Degradation (REDD), the Clean Development Mechanism (CDM) of the Kyoto protocol, carbon trading, and ecological debt.  These were big issues for the communities represented in Cochabamba, and will continue to be heading into Cancún.

This also raises an important point.  When the social movements met, what came through loud and clear was that people all over the world think that climate change should be solved by having those who pollute too much cut their emissions.  The communities and movements don’t want fancy trading schemes, and they don’t want their land, their labor, or their bodies to become a commodity to be sold in someone’s market (although neither do those who have been made marginalized and poor wish to stay that way – this is the “right to development” that has been so debated).  This broadly shared opinion by those outside of the negotiations differs somewhat from those governments, including Bolivia, who inside the negotiations have taken the approach of fighting for continued open negotiations by all nations and a maintenance of the Kyoto protocol.  This tension between the demands of movements on the outside and governments on the inside will be resolved favorably to the extent that movements can flex their muscle and the negotiations reflect what people want and not just what’s possible under the political power plays of the day.

But more than politics, the conference in Cochabamba brought to the table humanity’s relationship with Pachamama.  This question, raised most pointedly by the indigenous communities present, was reflected in the project of creating a declaration of Mother Earth Rights, but also went way beyond it.  Can we really reach a sustainable relationship with the Earth unless we stop looking at it as something to be conquered or fixed that is outside of us?  How would it change our lives and our struggles if we thought, as Leonardo Boff of Brazil said, “Todo lo que existe merece existir, y todo lo que vive merece vivir (Everything that exists deserves to exist, and everything that lives deserves to live)”?  Or if we understood the earth as a living thing that we are a part of and that, “La vida es un momento de la tierra, y la vida humana un momento de la vida (Life is a moment of the earth, and the human life is a moment of life)”?  Whatever the tradition that informed it, the clear message coming through in Cochabamba is that we have to get right with nature.  As president Morales said to open the conference, “Pachamama o Muerte! (Pachamama or Death!)”

Filed under: Articles & Speeches, Blog by Movement Generation
Comments Off on Earth Day Takes on New Meaning in Cochabamba | by MG