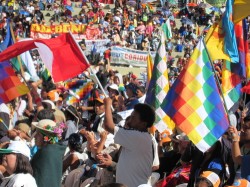 The CMPCC (Conferencia Mundial de los Pueblos sobre el Cambio Climático y los Derechos de la Madre Tierra) opened officially today with a mass rally of about 15,000 in a stadium with addresses by movement leaders, government negotiators on climate, and president Evo Morales of Bolivia. The rally opened with music, and an opening ceremony by Indigenous leaders from throughout the Americas. “We are here from the far north to stand in solidarity with our brothers and sisters of the South” said Faith Gemmill, Executive Director of Resisting Environmental Destruction on Indigenous Lands (REDOIL). “We have a choice as human kind – a path of life, or a path of destruction. The people who can change the world are here!”

The great presentations underscored the challenges of the moment. As president Morales reiterated, by EU estimates, the Copenhagen accord will only decrease CO2 emissions by 2% under 1990 levels by 2020, nowhere near what is needed. Speakers spoke to the political dynamics of the moment and the structural causes of the problem. Willy Meir, a Left deputy from Spain stated, “this conference has been produced from the failure of the Summit in Copenhagen, who’s authors, the most developed countries, have taken us into a dead end alley.” Multiple speakers articulated the impossibility of resolving the climate crisis with the existing neoliberal order in place, and that there can be no enduring equal relationship between humanity and nature if there is not first equality among all people. The presenters, who almost all came from the Global South, also underscored the responsibility and “climate debt” owed by first world nations who have produced the overwhelming majority of the pollution that got us here.

President Morales arrived with a welcome from a military honor guard, and gave a long presentation that was both politically sharp, radical, and at times humorous. In the end, he underscored that this crisis is a result of capitalism. And, capitalism and capitalist growth are incompatible with saving humanity (humanity because nature will endure regardless). Towards the end of his speech he concluded, “Either capitalism lives and the earth dies, or capitalism dies and the earth lives.”

President Morales is supporting calls for the continuation of negotiations to:
1. Include not only human rights but also “Mother Earth Rights” in the form of a UN resolution that would be binding and offer a legal basis for the defense of nature;
2. An International Climate Justice Tribunal to prosecute those who commit violations against nature and communities; and
3. A 2 billion person global referendum on solutions to climate to give all affected people throughout the world a direct voice in the path we choose.

In an interesting moment, a representative speaking on behalf of UN General Secretary Ban Ki-Moon was booed and heckled by listeners, still angry at the UN’s inaction, and it’s role in Copenhagen and the continuing negotiations. Over the coming days, the 17 working groups of the conference, which have been working intensively for the past couple days, will present proposals that will be integrated into a proposal for demands and actions. The UNFCCC process has been a failure at stopping emissions or bringing about a just climate policy, but it remains to be seen if the collective creation of the working groups will reflect a coherent alternative vision that can guide our work in coming years. Stay tuned!

Next episode – key issues and themes.

← Dispatch 1: Rumbo a Cochabamba | by MG The ABC’s of Climate Negotiations | by MG →