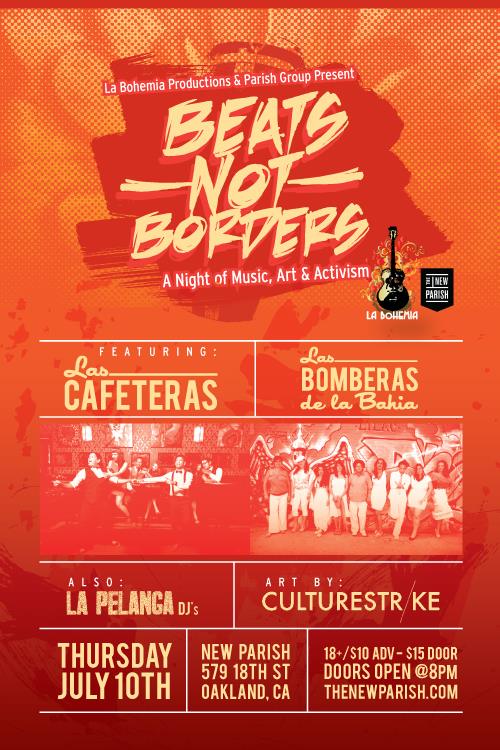 Las Cafeteras formed as a band in 2008 with the purpose of documenting the histories of their neighborhoods through music. As musicians, they started as students of the Eastside Café, a Zapatista inspired community space in East Los Angeles where they were influenced by the culture, storytelling, and poetic music of Son Jarocho, a traditional music from Veracruz, Mexico.

La Pelanga: La Pelanga is a DJ collective born out of Cali, Colombia, and based in Oakland, California. Since 2008, we bring together our community around a crazy, positive dance floor with the freshest sounds from Kinshasa and Cartagena, Port au Prince and Nueva York, Oakland and Abidjan. We mix the old and the new, the city and the village, bombardinos and autotune: cumbia, dancehall, afrobeat, salsa dura, soukous, champeta, kompa, hip hop, coupé decalé, currulao, and much more.

Culture Strike: CultureStrike is a magazine at the forefront of the national arts movement around immigration.
CultureStrike seeks to support the national and global arts movement around immigration. We are a network of artists, writers, filmmakers, musicians, and other cultural workers who want to fight anti-immigrant hate by bringing out the stories of migrants and creating counter-narratives about migration. We commission, publish, and broadcast new art, writing and media, featuring a wide range of literature, art and ideas in our online magazine of culture and politics.
As a grassroots organization, we’re cultivating collaborations between artists and activists, and exploring new models for cultural change. We send writers and artists to the frontlines of immigration struggles, organize pro-migrant cultural events. Our website has published poetry, fiction and journalism that broadens cultural perspectives on the immigrant experience.
For more information on our projects or to contact us with an idea for a collaboration or a submission, please contact theculturestrike [at] gmail [dot] com.

MC: Josh Healey
Josh Healey is an award-winning writer, performer, and creative activist. Fusing his distinct storytelling style with a subversive humor and fiery love for justice, Healey’s work has been featured in the New York Times, Upworthy, Huffington Post, and hyphy farmers markets from coast to coast. A regular performer on NPR’s Snap Judgment, he is currently the Culture Shift Fellow for Movement Generation, producing comedic videos and stories from the frontlines of the climate justice movement in the Bay Area and beyond.