From Richmond to New York: Growing the Movement to Build OUR POWER!

Report from the Our Power National Convening in Richmond, CA

On Aug 6-9, the Our Power Campaign National Convening brought together 450 frontline community members from across the country joining in Richmond, CA to “build the bigger we” for a just transition toward local, living economies.

Co-hosted by the Richmond Environmental Justice Coalition (REJC) and the national Climate Justice Alliance (CJA), we’d like to give our thanks to the many dedicated community members who gave so many hours to the success of our convening.

We kicked off the week with a public vigil commemorating the 2012 Chevron refinery explosion that sent 15,000 Contra Costa county residents to the hospital.

We spent three beautiful days together to educate, inspire and strategize with one another, including a powerful plenary on the history of the environmental justice movement, some of which we captured on film.

We ended three days later with a vibrant day of action and art on the Richmond Greenway. 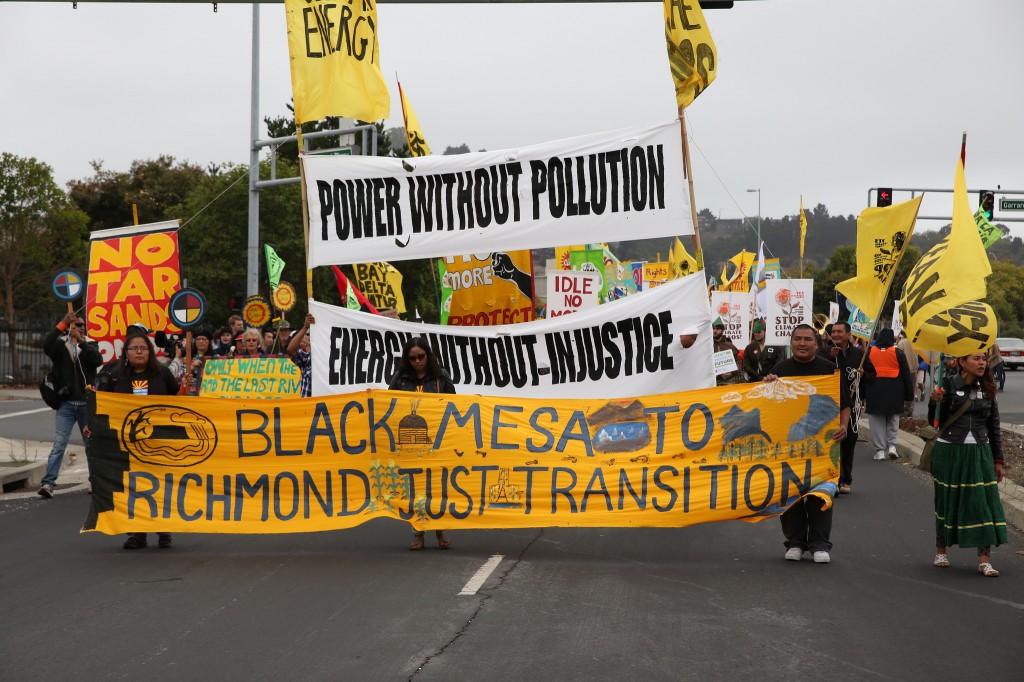 On the Our Power Campaign website, you can see the press release, opening day announcement, and a media advisory about the day of action.

We are also very fortunate that highly talented photographers contributed their time and energy to photo-documenting the convening and day of action.

Next up.. the People’s Climate March in New York City!

Join the Our Power Campaign in New York City for

On September 23rd, political and corporate leaders are meeting at the United Nations in New York City for the Climate Summit 2014. This summit represents yet another step towards the corporate takeover of the UN climate negotiations, and the privatization of land, water and air resources under the guise of a global climate compact. If they have their way, we will remain mired in the status quo of climate change, when what we need is a fundamental systems change.

The Our Power Campaign is mobilizing for the People’s Climate March to send a clear message to global leaders that It Takes Roots to Weather the Storm. The only solutions to the climate crisis are community led solutions.

The March will be on September 21st in New York City. Following the March, we will be hosting the People’s Climate Justice Summit concurrently with the UN Meeting, on September 22nd and 23rd.

Stay tuned for more information next week about how you can join the Our Power Campaign in New York. In the meantime, read our People’s Climate March Call to Action and begin making your plans for action in September–either in New York or in your own community.

We are asking you to help us spread the word by circulating the People’s Climate March Pledge, to your members and networks.

Check out our new creative resistance campaign to spread the message that It Takes Roots to Weather the Storm–consider creating a piece art that we can share as a poster or image to share via our social media sites.

Filed under: Blog by Movement Generation
Comments Off on From Richmond to New York: Growing the Movement to Build OUR POWER!